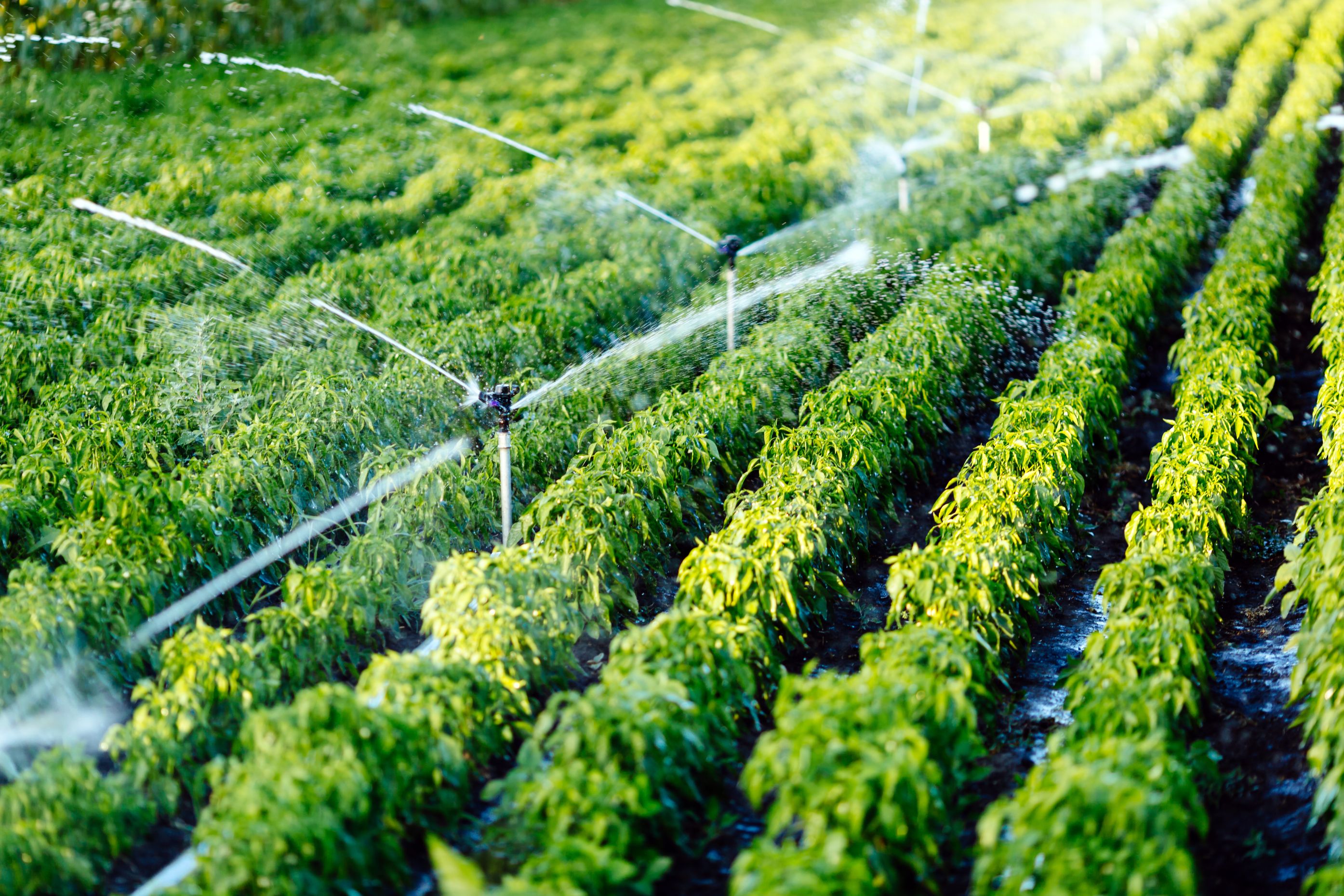 Agricultural irrigation has several different watering systems in its purview; the major ones are surface irrigation, sprinkler irrigation and trickle irrigation systems.  Surface irrigation waters primarily through flooding: sluice gates contain the water supply (a tank or, more frequently, a massive watering source such as a well or lake, since there must be a great deal of water used).  These gates are opened and the land is flooded, usually in furrows (plowed indentations in straight lines in a field), graded borders (border points surrounding a field that leads to furrows) or corrugation (a system of indentations leading from one field to another).

These methods are usually used for close-growing crops such as grain or hay, although furrow irrigation has been successfully used in row crops (such as vineyards and berry crops).   They are effective in that they provide good control of the water used, uniform wetting of the soil and (in the case of furrows and corrugation) good conservation features, since the land is less likely to wash out in a flash flood.

A one size fits all kind of irrigation is the sprinkler system.  Roughly similar to the sprinklers found on lawns and embedded into home watering systems, irrigation provides excellent control of water;  it works well for fields that are square or rectangular, and requires little labor or maintenance.  The kinds of sprinklers come in a wide variety, such as the linear move (the best of the systems, with 75-90% efficiency, which waters through a long pipe stretched across the width of the field and powered by tractor), the center pivot (the linear move, with a joint in the center of the pipe to allow maneuvers), the side roll (the pipe, stretched across the field, is supported by a series of wheels that move the watering system slowly along the fields length), the solid set (sprinklers in the ground, just like at home) and the Big Gun (a stationary sprinkler that sprays water in a 360-degree circle and is moved down the field slowly).

The sprinkler irrigation system is far and away the choice for most farmers who have a huge acreage to irrigate in single weeks or even days, as the seasons allow.  Its probably the most efficient system as well, as even the Big Gun system can boast 65% efficiency, and all sprinkler systems work well in any farm area on nearly all crops, except in excessively windy or hot climes.

Finally, there is the trickle irrigation method, which is best adapted for rocky terrain and steep ground that nevertheless bears crops (such as some hilled vineyards) and for flat surfaces on high ground (such as fields at the top of a hill).  The trickle system places small watering units throughout the field, fed with underground (or occasionally above-ground) water sourcesits ideal for a small field next to a well, to give one example.

The trickle mechanism will water the plants either above or below the ground (also known as the subsurface trickle), and a few systems (such as those in place for fruit orchards on rocky terrain) use a micro-mist or spraying system to irrigate.  Trickling is an excellent method for ground unsuitable for pipes or furrows, and permits storage of its water in the lower part of the fields soil profile.  It provides excellent control not only over water application but also of timing, and is especially good for soil with low infiltration and/or low water-retaining capacity.

Those are the major irrigation systems for agriculture.